Around 2017, I took up more seriously the "Grid Generator" project. A Web App to explore the possibilities of an infinite grid of squares. Driven primarily out of curiosity, I wondered if even I could create something cool with an endless grid of customizable squares?

I spent almost two years on it. Two years of trial and error iterations in code, UI, product orientation, business, and failing hard at all those things and so many others. "This time will be different." 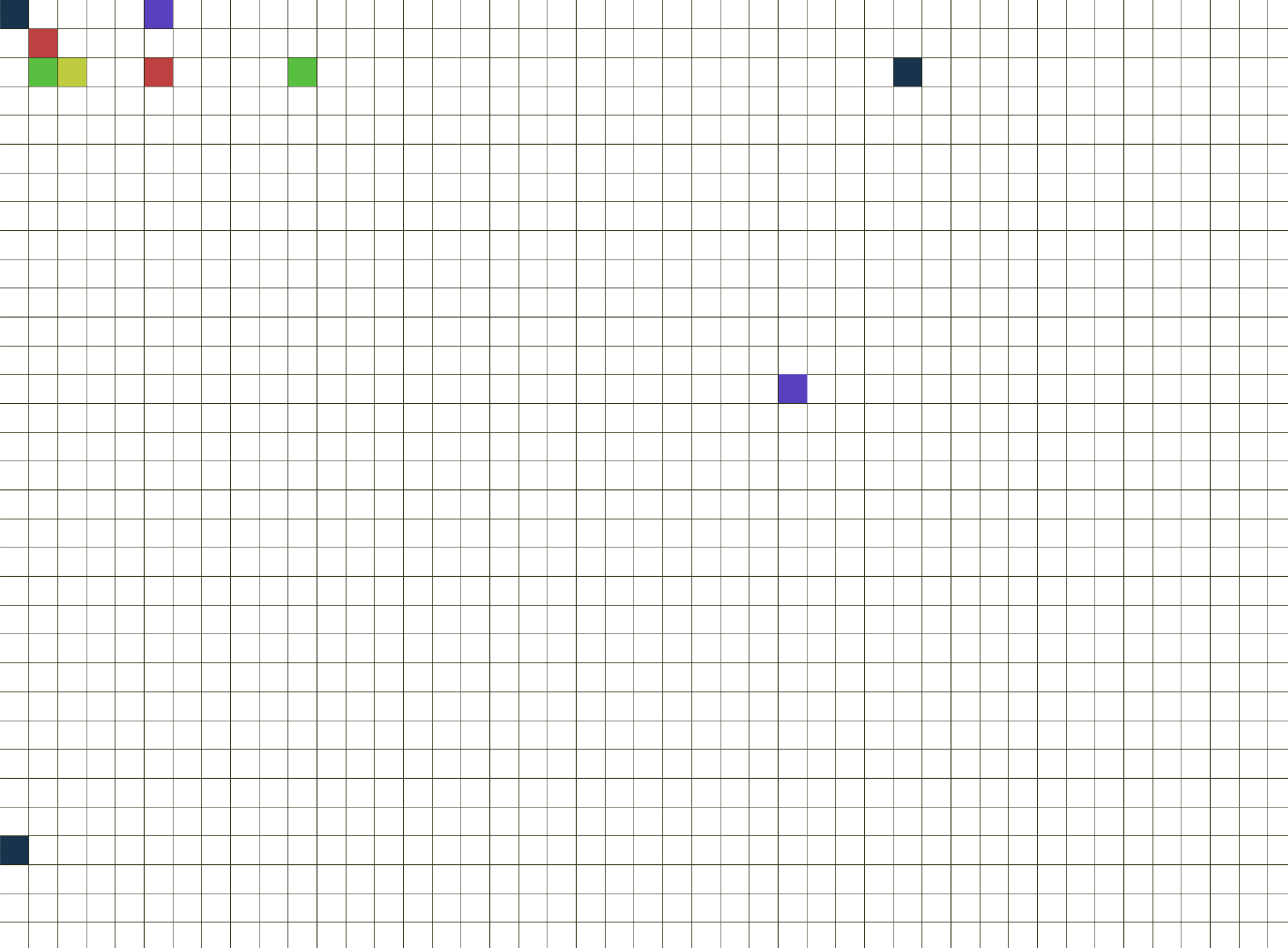 To do an infinite grid in WebGL 1, I used many buffers and sluggish texture updates at each frame (and vast texture atlases). The shaders code was a mess. Memory usage was like a rocket while at use. It also did not benefit from my rusty elementary math and miscalculations, breaking at most of the device's pixel ratios and CPU usage abuse wrapped in leaky abstractions.

The plan now is to change the part that needs to be improved: the WebGL version.

WebGL focuses on triangles. A square is nothing more than two triangles glued together.

There are a couple of primitives to describe triangles with WebGL. The "triangle fan" has excellent properties that I like to use. It allows triangle meshes to be represented by adding vertices on top of a root vertex. It is not only fast to process a triangle fan mesh, but it also can save a lot of space by avoiding vertices to be repeatedly declared per triangle.

On top of it, a triangle fan works well together with a line stripe. I can create an outline for the shape using the same mesh of points, no need to provide an extra mesh of points just for it.

There it is, a square and its outline all alone in the world.

Take a square, for instance.

The process to use instanced elements is as follows:

A single square would have 4 vertices total, 1 triangle fan element, and 1 instance of it (its a single square).

Using instances of a simple mesh can be faster to draw (fewer draw calls per frame). More importantly, the seed mesh can be changed to any shape, effectively allowing for infinite grids of any tileable form (or non-tileable if its your thing).

Infinity is a long way, especially towards the end.

An infinite grid needs to have at least enough squares to fill the whole screen, plus padding of one row and one column to accommodate the grid's panning.

A common approach to make it look infinite is to adjust its x and y position to be size - pan % size when moving the grid.

I tried many variations of this modulo and division approaches in the past "with varying degrees of success" (read: failure ☠️). Either precision errors started showing in some grid transformations (zooming, rotation, etc.)🔥, or subtle flickering would appear because of minor miscalculations ؇ that would then get emphasized with the conversion between the JavaScript 64bit floats and the GPU 32bit floats, or 🙈 squares would disappear.

So nothing unusual, just another day with my code 🤯.

Scrap all that. In the end, the best approach for an infinite grid that these two neurons could muster is more straightforward than those modulo and margin square adjustments. It goes like this:

Here is a rough sketch:

It is easy(er), and the GPU can do these calculations at lightning speed.

Pick me up before I go.

In the streets of graphics programming, selecting the grid element below the mouse pointer or at the touch position is sometimes called "picking". You "pick" the shape by mousing over it or touching it with those beautiful fingers.

The typical "simple" approach to perform this involves doing the shape<->mouse intersection with JavaScript (thus in the CPU). Calculating this intersection is a specialized function for each different figure (an intersection function for squares, another for hexagons, another for triangles, etc.). Doing it for a square grid is "very easy" when all the squares always align with the x/y axis and have the same size.

This time I want to explore a different, but common, technique for "picking". One that works with any shape. A global picking method compatible with anything I can throw at it.

This way, it is possible to get the shape id at each screen pixel, and when the mouse moves over a pixel or a finger touches the screen, the code looks for the shape id in the array of shape ids instead.

This technique is sometimes named "single-pass picking" and makes use of WebGL MRT (Multiple-Render-Targets - the screen and the array) and PBOs (Pixel-Buffer-Objects - arrays to use as if they were a screen).

It can work with any shape, with no need for special intersection functions.

Many optimizations can limit these drawbacks. Here is my favorite optimization of them all:

That is a 100% optimization right there. It beats "doing it faster" every time. Some even apply this to life in general with great success.

For this particular case of shape picking, it can be fruitful to avoid doing any work at all for the most part. Reading pixels from the screen/array is expensive and complicated. In WebGL, this requires at least one flush and one sync outside of the frame boundaries (besides the array copy).

These are not only hard to perform but also carry severe performance costs. They are not a good fit for every mouse move or frame.

The case of the grid is a curious one: interacting with its elements happens when the grid is stopped, if someone is interacting with a grid element then they are not moving/zooming the grid. A grid changes when there is a panning or zooming action. Besides those two actions, it stays the same. The shape ids are at the same position all the time (even if their contents change, the ids remain at the same place provided no translation or zooming is going on).

Interacting with grid elements only happens after the pan/zoom action finishes, which is the perfect place to "hide" the flush/sync/copy operation. Once right after the panning/zooming ends, WebGL renders the shape id's to multiple targets, flushes/syncs, and copies the array to the CPU, where it stays static forever (at least until some following pan/zoom operation finishes). Interacting with the grid is then only about reading this array for shape ids, with no need for WebGL or position updates.

What is next for <shader_canvas>?

You can read the code for this at the Shader Canvas repository (still in progress).

Shader Canvas is my low-level framework for graphics programming. It consists of HTML tags that perform each WebGL function, bringing the API into a declarative space.

I am working on its second iteration after the first release. I will evolve and use this framework for my next drawing web app called "Shape The Pixel". The road ahead for <shader_canvas> is like this in my head, things are going to change for sure:

Drawing an infinite grid in WebGL 2 can be done using its instance drawing functions to avoid repeating vertices and multiple-render-targets for picking. Read the pixels only once when the grid panning/zooming operation finishes to avoid WebGL pipeline stalls. Using these two WebGL graphics techniques allows for infinite grids of custom shapes so that shape updates happen (mostly) only at the single seed mesh/shape level.