Like most of the country in the 80's, Alenquer, the village where I was born, was trying to modernize itself in what can be considered an insurgence against its rural past.

The context of coming out from a strong harsh dictatorship and having recently joined the european comunity automatically made everyone who did not work a lazy person. Opportunities were everywhere. In fact this was so intense for the newer generations that working was not enough for them to avoid the "lazy stigma". You had to explore, experiment, live and enjoy the "new".

I was 6 years old when my parents made their after dinner routine visit to a friends house with the usual purpose of drinking and talking about stuff that seemed to matter. What was supposed to be just another day in the company of friends changed my life forever.

"I have finally bought the computer" he said, on the corridor table there was a box with a screen and keys to press.

"It's a schneider" He turned it on, typed some words on the keys and started a game. The first computer game I saw and got the chance to play.

I had lots of questions in my mind after playing it:

The world is dangerous

Slightly older kids were having a blast with the ZX spectrum.

It became quite famous in Portugal, companies were using it to ease some calculations, kids were pirating cassettes, and there were even local radio stations that used to broadcast entire games through the air (which you could then record in your cassette tape). Electronics done right.

The speccy sported an impressive 16 color palette (15 actually, the black is repeated).

Gravitating towards that tech and gaming oriented crowd made me later aware of a bunch of other computers that were also very important even though they were never famous here.

The Amstrad CPC was a direct competitor of the Spectrum, it also had a base of 16 colors but expanded them into 27 in a "high-resolution" mode. 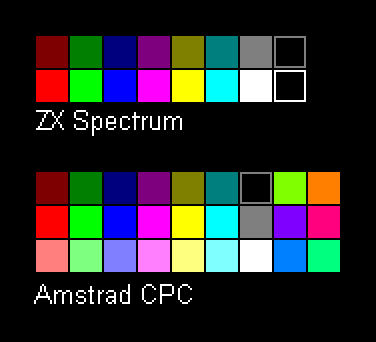 This was a clear upgrade in comparison to the 16-colors of Spectrum.

In spite of having more colors this palette shies when put against the mother of all 8-bit computer 16 color palettes: 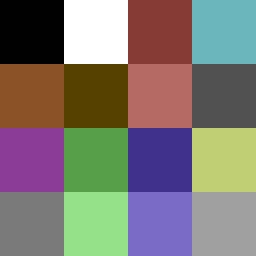 These 16 colors alone allow for an amazing expression (if you are into it here is a detailed article on how to reproduce them in RGB).

A kind soul used both color palettes (C64 and Amstrad CPC) to produce a set of comparison images, the C64 images are more natural and its grays are better distributed which in turn allows for slightly more complex shadows.

All these color palettes were made to be reproduced in TV screens from the 80's. Some even take in consideration B&W TV's as full 24bit RGB was still a few years away from commodity hardware.

Fast-forwarding for today, a niche of people are still using 16 color palettes and searching for possible combinations of colors that maximize expression. Most of these are related to "pixel art" communities and other minimalist art movements.

Truth is that there is a natural feeling in using colors in sets of 16 related elements. It gives you, the artist, a lot of paths to explore but not many enough to degrade the exploration experience into frustration.

As a final exercise I'll leave three different loader screens for the same game. Try to see if you can guess which 8-bit computer is which. 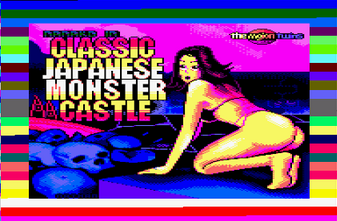 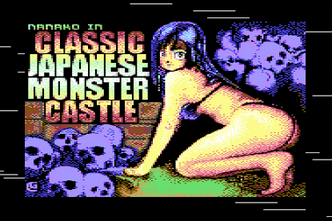